Port Adelaide, about 10 kms north-west from Adelaide City, with its maritime ambience of sailing ships, wharves and landmark Colonial buildings is an interesting place to visit.

Port Adelaide was officially established four years after the Colony’s foundation in 1836 and soon became the thriving maritime heart of the developing colony.

The Port River connects the Inner Harbour to Outer Harbour. Port Adelaide was the hub of South Australian trade and industry and the disembarking point of new settlers.

Port Adelaide is rich in history, culture and natural beauty. Residents have a fierce loyalty to the city, its past and their football teams – the Adelaide Crows and Port Power. The Port and surrounding coast is the country of the Kaurna Aboriginal people of the Adelaide Plains. Their cultural heritage, beliefs and relationship with the land are of continuing importance.

Port Adelaide retained its momentum right up to World War II, when the focus of shipping activity began to change. Reducing commercial pressures proved a boon to the modern-day city, with many of its impressive 19th century buildings remaining to delight today’s observer.

Whilst activity on the docks is now far removed from the hectic bustle of yesteryear, the Port is undergoing major changes, with a massive  redevelopment.

CLICK HERE to view properties for sale in the area

Dolphin Sanctuary
Port River’s estuarine waters, home to a community of bottlenose dolphins,  is part of the dolphin sanctuary. These are perhaps the most urbanised dolphins in the world, for no where else are dolphins known to live so close to a city of a million people. Dolphins can often be seen from the riverbank. They love to ride the bow wave of yachts and tug boats and are worth watching for. 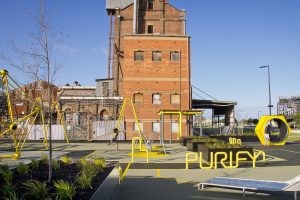 Port Adelaide’s Dolphins
Among Adelaide’s better known dolphins are Billie, who became world famous for her habit of swimming with race horses; Two Notch the dominant male and Captain Hook, his handsome partner;  Black Beauty, an old male  who lives on the margins of the local society and Pheobie a young mother who had to be rescued after becoming entangled in marine litter. Boisterous young males such as Badger and Leonardo make their presence known in the breeding season.  Babies are usually born in late summer. You can learn more about these fascinating creatures by visiting the Port River Dolphin Trail or booking a river cruise.

Start with a visit to the award-winning Visitor Information Centre. Here you can book a guided Port Walk, providing a fascinating insight into the history of this once bustling port.

There are a number of excellent Museums, all within walking distance as well as attractions, art galleries and interesting shops.

Check out the Sunday Fishermen’s Wharf Markets and the Torrens Island fresh produce market nearby, is open Sunday mornings –  you can buy fresh fish from the fishing boats!